David Hockney, alive and well at 83 years old is an English painter, draughtsman, printmaker, stage designer and photographer. He attended the Bradford College of Art and the Royal College of Art in London. Hockney is an important contributor to the Pop art movement of the 1960s, he is considered one of the most influential British artists of the 20th century.

Hockney is an active arts advocate and his work is widely recognized, awarded and in fact he was even offered a knighthood (which he declined). In 2012, Queen Elizabeth II appointed him to the Order of Merit, an honor restricted to 24 members at any one time for their contributions to the arts and sciences. He is also highly praised for adopting technology, with artworks created on the iPad. Admittedly he didn’t take to the Apple device quickly. “It took me awhile to realize it’s quite a serious tool you can use,” he said.

Having been raised in Southern California, I connect with the feel of his swimming pool paintings in a melancholy sort of way. They are reminiscent of the feeling of a hot day in Southern California, the starkness of the blue water and concrete and a longing that I had growing up of wanting to escape. The 1960’s architecture that is still prevalent is a simple reminder of an era elapsed. Hockney once said, “We always see with memory”. And this is so true! 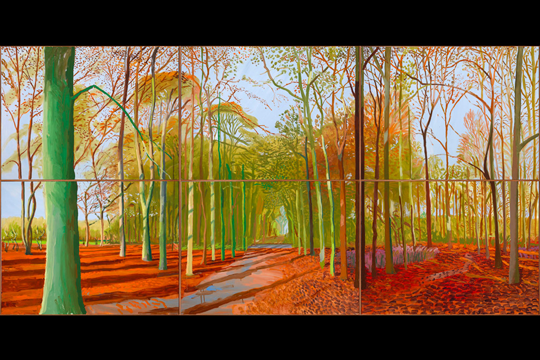 Not a fan of Southern California but of David Hockney, I really love his forest series inspired by the Yorkshire countryside. His series “A Bigger Picture”, suitably named, is huge in scale. I could live in this fantasy world of cool woods, whimsical vines and wandering paths. On my bucket list is to experience these large paintings in person, I’m sure they are overwhelming.

Hockney’s work continues to amaze and inspire me, his style evolves into new places as he ages and his work is not only an inspiration for the arts but for graphic design too.

As you get older, it gets a bit harder to keep the spontaneity in you, but I work at it.
-David Hockney