Born June 6, 1756 John Trumbull was an American artist of the early independence period.  Trumbull’s greatest achievement was receiving a commission from the US government to paint 4 gigantic murals in the US Capitol after its destruction during the War of 1812. President James Madison personally picked out the paintings, which were Trumbull’s The Declaration of Independence, The Surrender of General Burgoyne, The Resignation of Washington and The Surrender of Lord Cornwallis. It took Trumbull 8 years to finish the paintings. When it was all said and done it was not a great success in the eyes of many who were critical of his work. 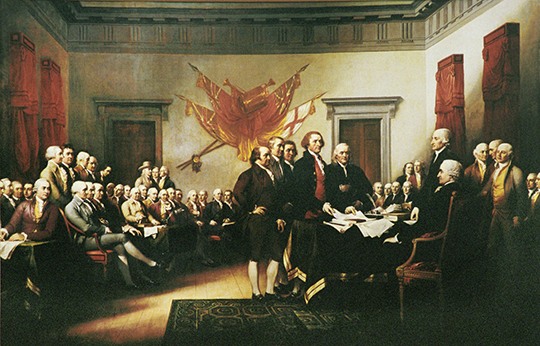 The Declaration of Independence

The goal of the The Declaration of Independence painting was to preserve the exact likenesses of those extraordinary individuals—aristocrats, lawyers, doctors, farmers, shopkeepers—who had put their lives and fortunes on the line. Trumbull worked on the Declaration for more than three decades, hoping to include all fifty-six figures, but he was unable to obtain all the likenesses. Of the forty-eight portraits here, thirty-six were taken from life; others were copied from an existing portrait or taken of a son as a substitute.

In the event of The Declaration of Independence, the 13 American colonies severed their political connections to Great Britain. 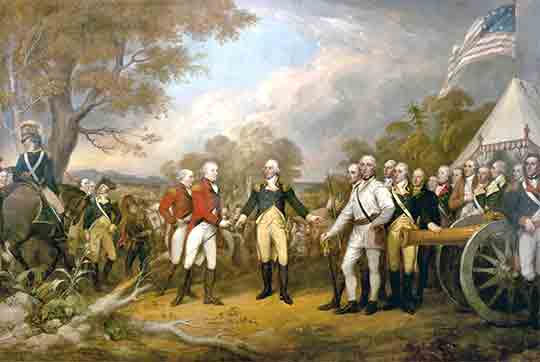 Painted in 1826, the scene shown in this painting is the surrender of British General John Burgoyne at Saratoga, New York on October 17, 1777. 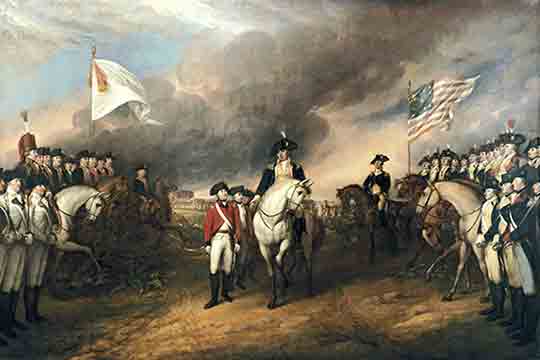 The subject of this painting is the surrender of the British army at Yorktown, Virginia, in 1781, which ended the last major campaign of the Revolutionary War. 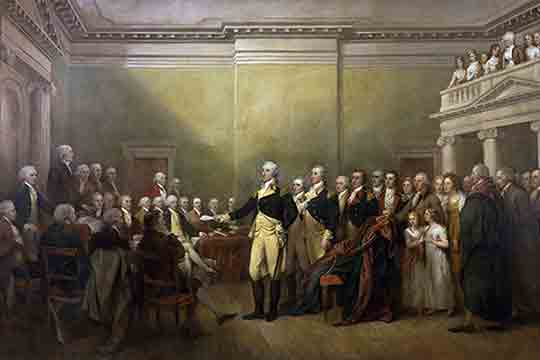 This painting depicts the scene on December 23, 1783, in the Maryland State House in Annapolis when George Washington resigned his commission as commander-in-chief of the Continental Army. The action was significant for establishing civilian authority over the military, a fundamental principle of American democracy.

What do these paintings mean – and why are they important?

The paintings express and document the break from Britain and its King to claim the power of an independent country.
In the early 1770s, more and more colonists became convinced that Parliament intended to take away their freedom. In fact, the Americans saw a pattern of increasing oppression and corruption happening all around the world. Parliament was determined to bring its unruly American subjects to heel. Britain began to prepare for war in early 1775. The first fighting broke out in April in Massachusetts. In August, the King declared the colonists “in a state of open and avowed rebellion.” For the first time, many colonists began to seriously consider cutting ties with Britain. The publication of Thomas Paine’s stirring pamphlet Common Sense in early 1776 lit a fire under this previously unthinkable idea.

The Declaration of Independence July 4, 1776

We hold these truths to be self-evident, that all men are created equal, that they are endowed by their Creator with certain unalienable Rights, that among these are Life, Liberty and the pursuit of Happiness. To read the entire document, click here.

To this day, United States celebrates the 4th of July. The tradition of setting off fireworks on July 4th began in Philadelphia in 1777, the first organized annual celebration of Independence Day while Congress was still occupied with the ongoing war. The Ships’ cannon fired a 13-gun salute in honor of the 13 colonies.

As Thomas Jefferson once said: “My God! How little do my countrymen know what precious blessings they are in possession of, and which no other people on earth enjoy!”