Frida Kahlo, born July 6th 1907 is Mexico’s most famous woman artist. She is best known for her self-portraits that express the emotional effects of pain, loss and tragedy in her life. Upon viewing her work one can’t help to be engaged with the intensity of emotion and passion along with a lingering curiosity as to the meaning and representation of her surrealistic imagery.

From a traditional viewpoint, Frida’s work expresses the essence of her culture in the 1920’s. Many of her paintings include artifacts of Mexico and traditional Mexican costumes – long skirts and dresses. She rejected conventional Western standards of beauty such as groomed eye brows and groomed her unibrow and even mustache to make them darker.

Domestic elements of her work connect with ordinary life with her love for her pets which is evident in her self portraits with monkeys, birds, cats and more. Her bright colors express a celebratory feel of Mexican folk art and her direct unwavering stare insinuates brashness and boldness.

However, this boldness in her work scratches at the surface to reveal the deeper meaning of her work that reflect her tumultuous relationship with Rivera, as well as the anguish of her ever-deteriorating health. Frida’s art dramatizes the pain in her life while cultivating an image as a bold survivor.

Pain
The pain Frida expressed in her art continued past the physical pain in her life from disease and accident into emotional pain when she married Diego Rivera. As if her bodily injuries weren’t compelling enough, Frida’s drama – as well as her art – was enhanced by what she referred to as the second accident in her life: Diego Rivera, the famous Mexican muralist and notorious womanizer to whom she was married for 25 years and subsequently in his shadow for the better part of it. Her work didn’t attracted the attention and praise of Diego, which in the beginning of their relationship she longed for. 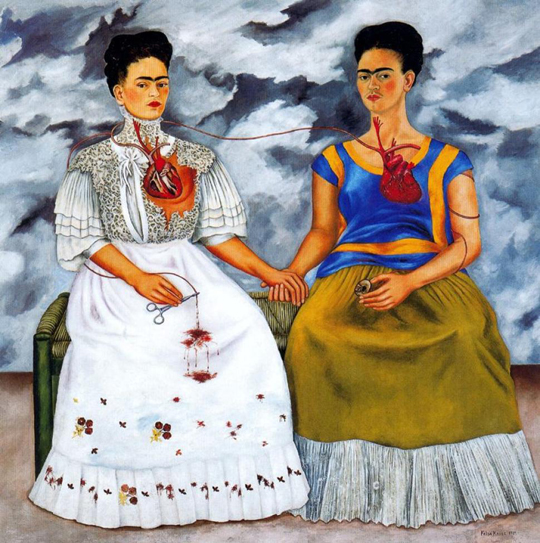 The Two Frida’s
Hailed as one of her most famous pieces, the intimate and personal painting is notable for it’s surrealism and symbolism. It is believed to be a painting depicting her deep hurt at losing Diego. One Frida sits on the left of the painting; this is the Frida that was rejected by Rivera, Her blouse is ripped open, exposing her broken and bleeding heart. 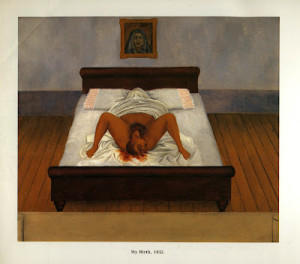 In 1932 Kahlo had a miscarriage, which prompted her to paint some of the most gruesome of the self-portraits that later sealed her reputation as one of the most original painters of her time. One of Frida most startling works, “My Birth,” painted in 1932 was in process when Kahlo found out that her mother was dying of cancer. The painting expresses a startling look at a partially covered woman’s body with Kahlo’s bloodied head bursting out of the vagina.

Currently the ‘My Birth’ painting is owned by Madonna whom is a avid collector of Frida’s art. It’s also thought that Madonna owns Kahlo’s 1943 work Roots purchased for $5.6 million at a Sotheby’s auction. 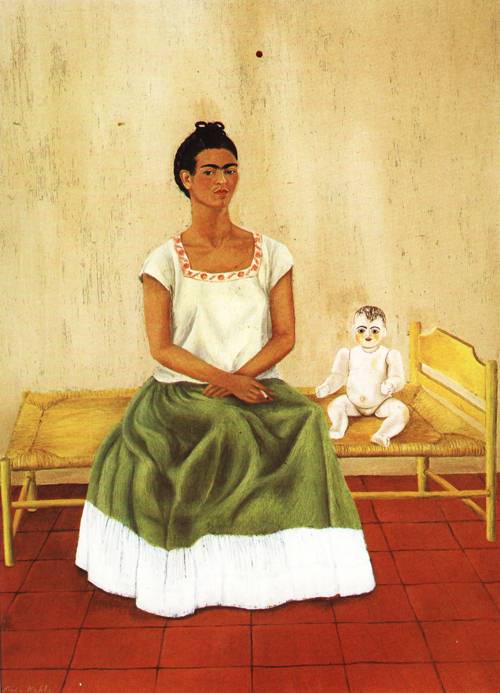 Me and My Doll – 1937
Many of Frida’s paintings express a fascination with procreation, and some directly reflect her despair at not having children due to her 1925 bus accident which left her unable to bear children. As substitutes for children she collected dolls and kept many pets on which she bestowed her affection.

One of the most moving paintings is a self-portrait of Frida sitting on a bed next to a lifeless looking child/doll. She is smoking a cigarette and looks bored, and is sitting some distance from the child on the bed–a reflection that is believed to be her real lack of maternal instincts.

Niña con Mascara de Muerte (Ella juega sola) – Girl with Death Mask (She Plays Alone)
In 1938 Frida painted this painting and it is thought to be a portrait of her when she was four years old. She is wearing a skull mask traditionally worn at the annual Mexican festival “Day of the Dead.” The girl is holding a yellow flower that looks like the tagete flower that Mexicans place on graves during the “Day of the Dead.” Frida gave this painting to the actress Dolores del Rio as a gift. Later it became a part of a private collection in Monterey, California. It’s now a part of the collection at the Museum of Art in Nagoya, Japan. 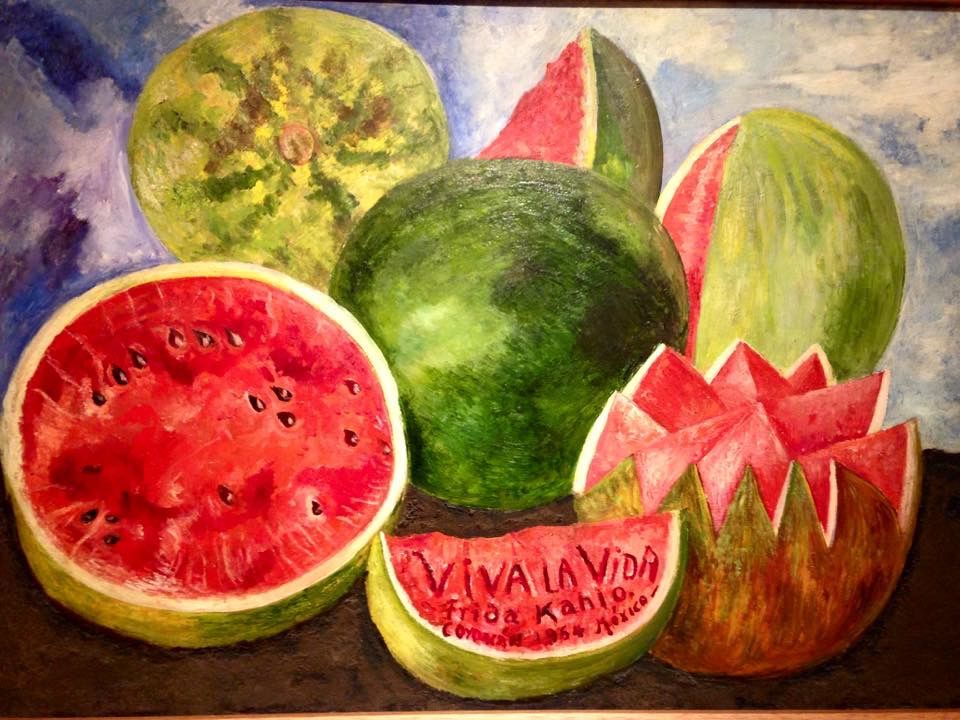 Personal tragedy struck in 1953, when due to complications her right leg was amputated below the knee. Kahlo’s last painting, which she completed shortly before she died, was a still life with watermelons. The watermelon in Frida’s painting has much meaning and is a frequent subject in Mexican art. It is a popular symbol in the holiday Dia de los Muertos (Day of the Dead) which commonly depicts watermelons being eaten by the dead or shown in close conjunction with the dead.

Eight days before she died, she wrote her name, the date and the place of execution on the melon’s red pulp, along with the title “VIVA LA VIDA – Coyoacán 1954 Mexico”, in large capital letters: Long Life Life!

Kahlo died in 1954, at the age of 47. She spent her life in pain, and wrote in her diary a few days before her death that she hoped ‘the exit is joyful, and I hope never to return’.

For almost 30 years Kahlo largely disappeared from the mainstream art world, until the 1938 book was published “Frida: A Biography of Frida Kahlo.”

When it was published, there wasn’t a single monograph of Kahlo’s work to show people what it looked like, but the biography sparked a Frida frenzy that continues today.

If you would like to participate in our Fridamania celebration, create something inspired by Frida.
See the details here!

“I paint my own reality, the only thing I know is that I paint because I need to, and I paint always whatever passes through my head, without any other consideration.”