The Old Guitarist – More than Meets the Eye

Pablo Picasso is considered one of the most iconic artists of all time. The Old Guitarist is perhaps one of his most famous paintings from the Blue Period (1901 – 1904). The painting is expressive of the monochromatic style in which Picasso painted mainly in shades of blue and blue-green.

At the time of this painting in 1903, Picasso was very poor. His poverty gave him unique and emotional insights. It was also during this time that one of Picasso’s good friends had committed suicide and his feelings of sadness, melancholy and emptiness are expressed in his artwork.

Somber in color and subject matter, the painting we are about to look closer at is reminiscent of Francisco de Goya’s theatrical style.

The Old Guitarist depicts an older haggard man on the streets of Barcelona, Spain. The composition expertly frames the mood and isolation in the painting.

In his early years, Picasso received formal artistic training from his father in figure drawing and oil painting, and expertly applies the composition rules of thirds. The rules of thirds dictates that if you divide any composition into thirds vertically and horizontally and then place the key elements of your image along these lines or at the junction the arrangement will be more dynamic. 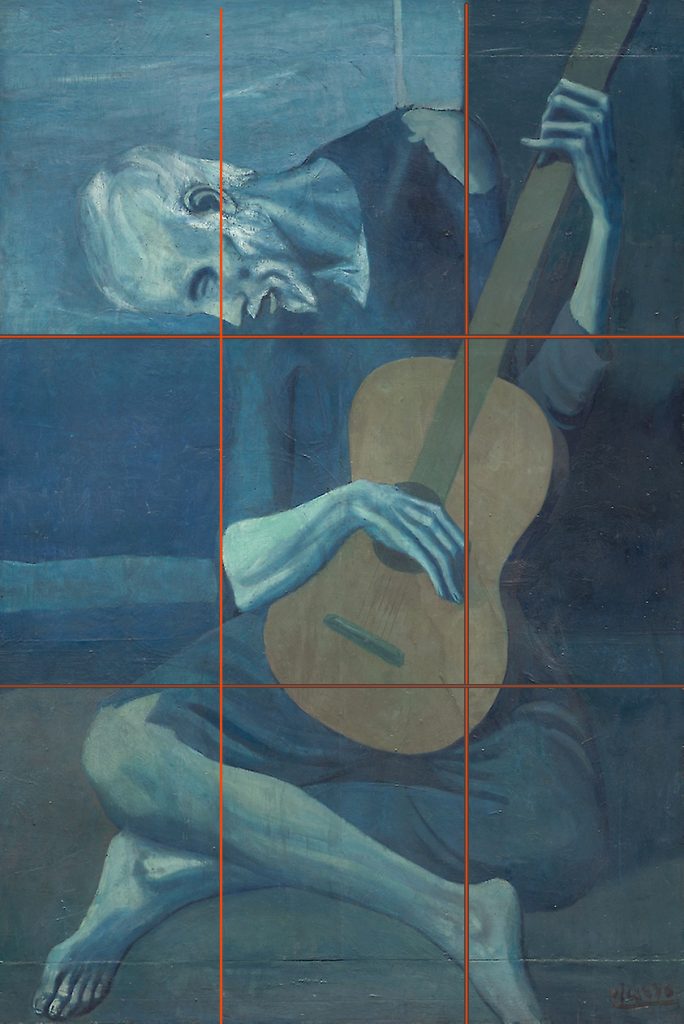 Thorough composition, paint, subject matter and intuition, an uncomfortable disconnect is presented to the viewer of the painting.

In the middle of the composition, The Guitarists right arm and hand seem to suspend in mid air. Elongated fingers curve towards his right leg which wraps him in a cocoon like state. At the top right of the composition the fingers are elegantly positioned in action and elevated a bit higher then the shoulders as if reaching beyond the confinement of the space.

The angular composition behind him (which is later prevalent in Picasso’s Cubism phase) seem to close in on the Guitarist compressing him into a tiny space that feels airless. Dramatic dark’s and lights further accent the composition as the final touch of melancholy.

The Guitar – The Most Valued Possession

The guitar in The Old Guitarist is a curiosity in the painting. Centered in the composition, the empty eyes of the Guitarist (expressing his blindness) align vertically at the junction of the third with his nose and mouth downward and then sweeping upward from the elbow to the delicate hands which bring your eyes to the guitar. The monochromatic style takes a slight turn as the guitar is painted a warmer color.

The guitar is the bright spot in the painting which may symbolize the most important possession the man has.

Homeless street musicians in Barcelona relied on a small income that could be earned from their music. The guitar being the most valued possession of the Old Guitarist and the music being his escape.

Was the guitar painted by Picasso in The Old Guitarist from a long line of famous guitar markers in Barcelona – starting with Juan Estruch Rosell in the late 19th century?

We will never know the whole story behind the life of The Old Guitarist, however Picasso in all his genius presents a scene that evokes emotions and impacts generations.