In celebration of Freud’s birthday in May (6 May 1856 – 23 September 1939) let’s take a look at where the real talent was! Freud’s grandson Lucian Freud, the late British artist and figurative painter.  Freud got his first name “Lucian” from his mother in memory of the ancient writer Lucian of Samosata. His family moved to England in 1933 to escape the rise of Nazism. From 1942 to 1943 he attended Goldsmiths College, London. He served at sea with the British Merchant Navy during the Second World War.

His early work was inspired by surrealism however Lucian is known for his nudes of regular people and much of his career was spent in relative obscurity.  In the last quarter of his life, however, his audaciously explicit portraits would intrigue the art world and sell for millions.

Lucian talented in his own right observed people on a much different level than his grandfather. He seemed to capture the essence of a person with his rough brush strokes, while his grandfather connected on an impersonal intellectual level.

Lucian with his keen artist eye was able to capture and express the vulnerable humanity of regular people. He seems to capture an essence and intimacy that is somewhat disturbing. His painting “Benefits Supervisor Sleeping” painted in 1995 (and sold in 2008 over 33 million dollars  – the world record for the highest price paid for a painting by a living artist at the time),  captures fleshy rawness and the discomfort of the sleeping woman, Sue Tilley.

Sue was an ongoing model for Lucian. She is quoted as saying in 2008:

“I’m not the ‘ideal woman’, I know I’m not. But who is? And he never made the skinny ones look any better. He picks out every single little detail.” 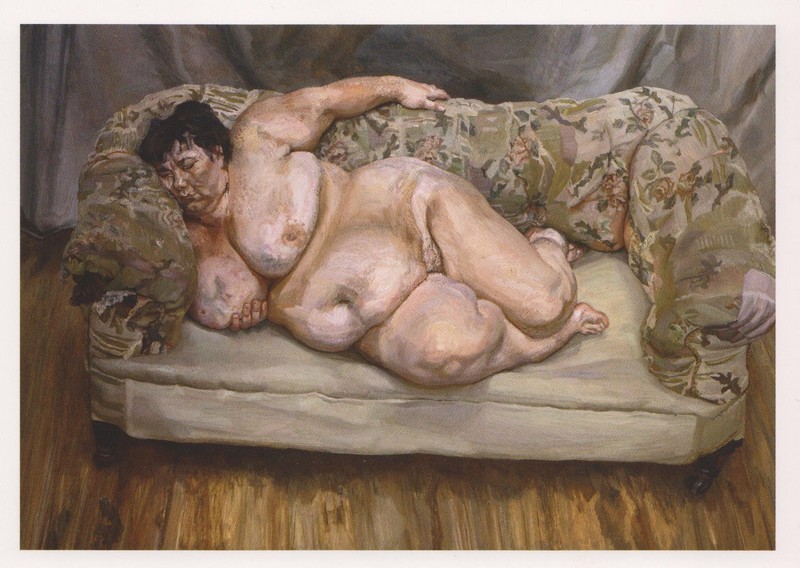 Benefits Supervisor Sleeping: “He made me look so horrible.”

The painting took months and the initial sitting had her posing, in great discomfort, prostrate on the studio floor – “and he made me look so horrible. I’m shaking now as I think of it”,  Sue said. Once “Benefits Supervisor Sleeping”,  got underway Freud bought the sofa for her to rest on. “It was lovely and comfy, and I just lay on it, really, for nine months. Even when Lucian worked on the background he insisted his model was present.

During the work, painted in daylight, Tilley showed up at Freud’s studio early to catch the first light. “I might arrive at 7am. Then we’d sit in the kitchen, have a little chat, have breakfast, a snack. The first session would be quite long, when we were both quite fresh and there weren’t many interruptions.”

“Sometimes he’d take me out for lunch, which I liked, and we’d work again in the afternoon. It was quite exhausting, just lying there. I know it sounds silly, but it was.”

The world record for the highest price paid for a painting by a living artist at the time.

In 1995 the life-size painting fetched $33.6 million during bidding at Christie’s auction house in New York.

Lucian died on July 20, 2011 and his paintings are among the most sought after.