Beatrix Potter born in London on July 28th 1866, was an English author, illustrator, natural scientist and conservationist best known for her imaginative children’s books featuring animals such as those in The Tale of Peter Rabbit.

Influenced by her father Rupert Potter a barrister who chose not to pursue his profession but his passion for art and photography, Beatrix was an imaginative and independent woman who was way ahead of her time in an era that kept women ‘properly’ inhibited.

“Thank goodness I was never sent to school; it would have rubbed off some of the originality.”

A fascination in the sciences and a love for animals and nature was an ongoing inspiration for Beatrix and her paintings and illustrations. At the age of eight Beatrix was already studying and recording the characteristics of a wide variety of animals, birds and insects in a home-made sketchbook.

This habit of spending time observing the form and structure of living things continued throughout her childhood and into adolescence. She observed and dissected animals in order to discover their precise physiognomy and anatomy. Her early passion for scientific investigation became integral to her method as an illustrator.

Educated by private governesses, which was common for wealthy families, Beatrix was able to pursue and excel in literature, science, history and private art lessons.

“I cannot rest, I must draw, however poor the result, and when I have a bad time come over me it is a stronger desire than ever.”

Through her 20s, Beatrix developed into a talented naturalist. She made studies of plants and animals at the Cromwell Road museums, and learned how to draw with her eye to a microscope. Her scientific studies were exceptional though not taken serious since she was a woman. However, her talent and capabilities would eventually earn her the respect she deserved in spite of discrimination.

Beatrix was also an accomplished still life painter and at age 15 produced remarkable paintings – though not widely known for this.

She painted for many years for her own amusement and story telling for family and friends before she decided to pursue commercial work.

“I hold that a strongly marked personality, can influence descendants for generations.”

With a fondness for her rabbit character and story, she decided to turn it into a picture book. Determination to see the book published did not stop her even though the book was rejected by several publishers. She printed the book herself with 250 copies.

The “Tale of Peter Rabbit” was a great success with family and friends.

In 1902 Frederick Warne & Co. agreed to publish an initial quantity of 8,000 copies which sold out instantly and her career as a storyteller and illustrator was launched.

Potter was also a canny businesswoman. As early as 1903 she made and patented a Peter Rabbit doll, the world’s oldest licensed character. It was followed by other “spin-off” merchandise over the years, including painting books, board games, wall-paper, figurines, baby blankets and china tea-sets. All were licensed by Frederick Warne & Co. and earned Potter an independent income as well as immense profits for her publisher.

With the proceeds from the book and a family inheritance she went on to purchase a farm, Hill Top Farm in Near Sawrey and over several decades purchased additional farms to preserve the unique hill country landscape.

Beatriz remained single until age 47 when she married William Heelis. They enjoyed a happy marriage of thirty years.

“Most people, after one success, are so cringingly afraid of doing less well that they rub all the edge off their subsequent work.” 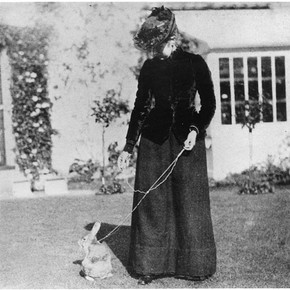 Beatrix Potter published over twenty- three books and the best known are those written between 1902 and 1922.

She continued to write, illustrate and design spin-off merchandise based on her children’s books for Warne until the duties of land management and diminishing eyesight made it difficult to continue.

She died at age 77 of complications from pneumonia and heart disease. She left nearly all her property to the National Trust, including over 4,000 acres of land, sixteen farms, cottages and herds of cattle and Herdwick sheep. Hers was the largest gift at that time to the National Trust and it enabled the preservation of the lands now included in the Lake District National Park and the continuation of fell farming.

Tweet2
Pin24
Share22
48 Shares
Tags from the story
Famous Children's Book Illustrator, History of the Tale of Peter Rabbit, who was Beatrix Potter